The church was built in 1966 to the designs of the architects Denys Hinton & Associates, and was consecrated on 7th May 1966 by the Rt. Rev. Leonard Wilson, Bishop of Birmingham. A major refurbishment, including the installation of a new sloping roof, a false ceiling and clerestory windows above the chancel wall at the east end of the church, was carried out in 1999, the architects being Jenns Howell Limited. 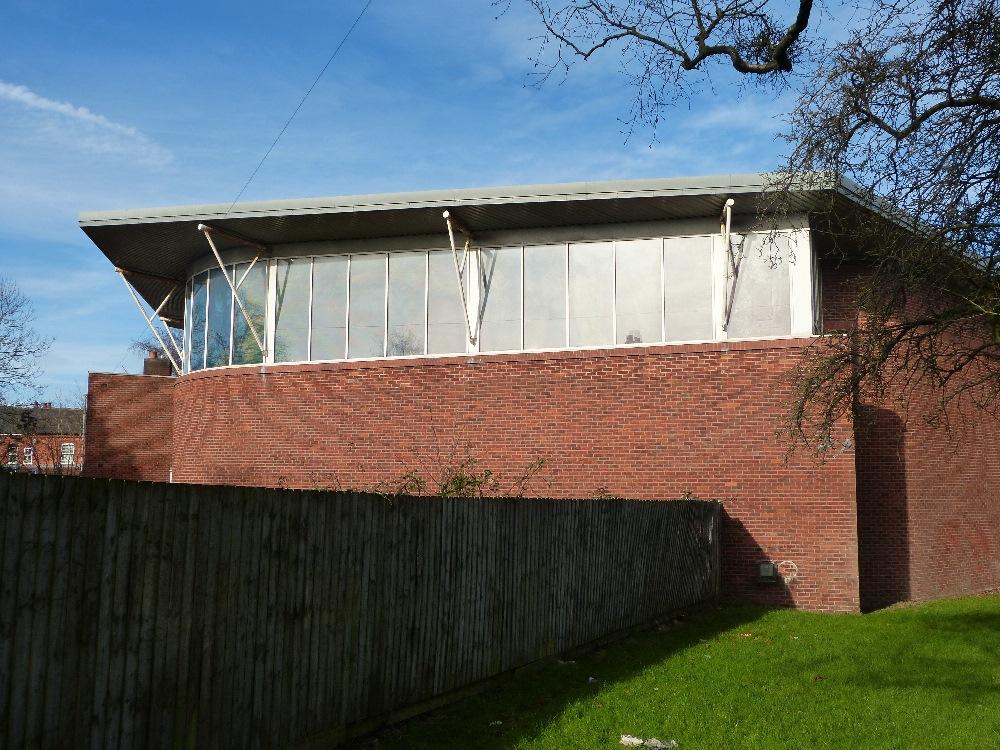 The dominant feature of the building is the high altar, to the left of which, not in its traditional setting of close by the entrance to the church, is to be found the font. Behind the altar are sedilia (seats for the clergy and servers), while on the right hand side of the east wall behind the altar is the aumbry, containing the Reserved Sacrament. The removable altar rails, made in oak to match the sedilia, and which replaced the original rails in 1999, curve around the altar, emphasising the feeling of community and fellowship shared by the communicants at the Eucharist. The pulpit and lectern are combined into a single unit, while close by is the priest’s stall. Natural light is provided by the tall baptistery window facing Rowlands Road, and (following the 1999 refurbishment), by the clerestory windows, (replacing the original roof light). 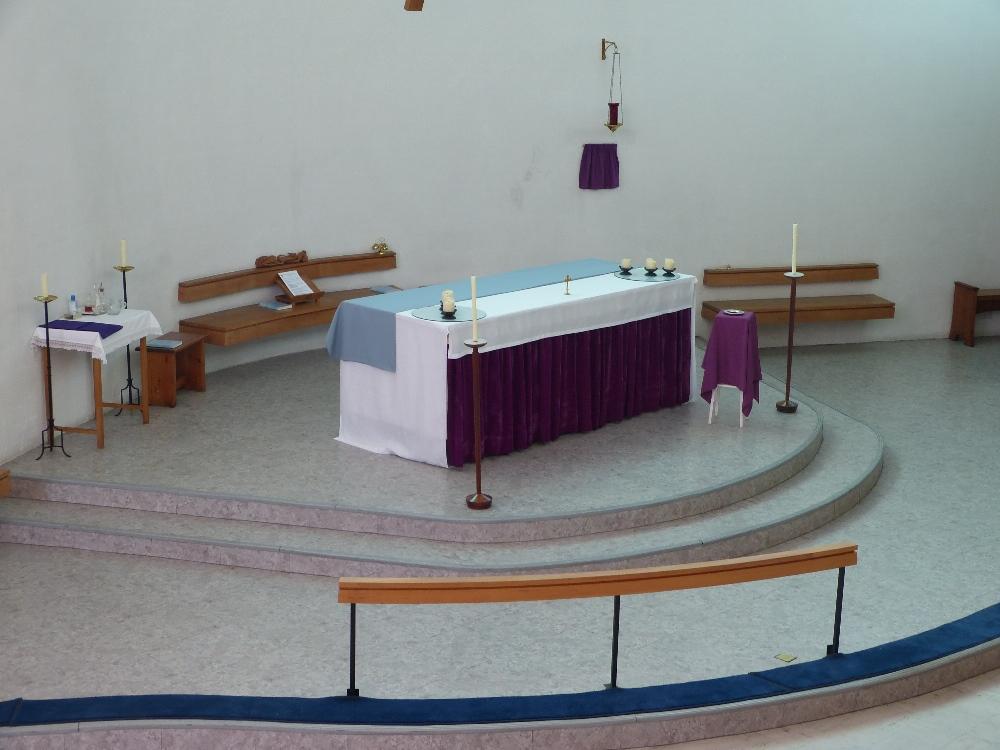 The sacristy, which is located on the opposite side of the narthex, was formerly the chancel of the ‘old’ St Michael’s, built in 1930, with the nave becoming the core element of what is now the church hall.

The Gregory Chapel, in the north aisle under what was originally the organ gallery, was set up in 1997 for private devotions and more intimate liturgies, and also provides a beautiful setting for the annual Altar of Repose on the eve of Good Friday. The catalyst for this innovation was the statue of St Gregory which had been acquired from the church of St Gregory the Great, Small Heath, when that church was closed, and which was then donated to St Michael’s. The altar came from All Saints, Shard End, but the Art Deco silver cross and candlesticks (Birmingham 1930), came from the ‘old’ St Michael’s, as did the votary lamp, originally the sanctuary lamp. The candlesticks standing by the statue originally stood on the high altar. The carpet, possibly from Turkmenistan, and a superb example of an Islamic prayer mat, was funded by a bequest from a former member of the congregation. For more detail on the statue of St.Gregory, written by Margaret Brinkworth, click here: 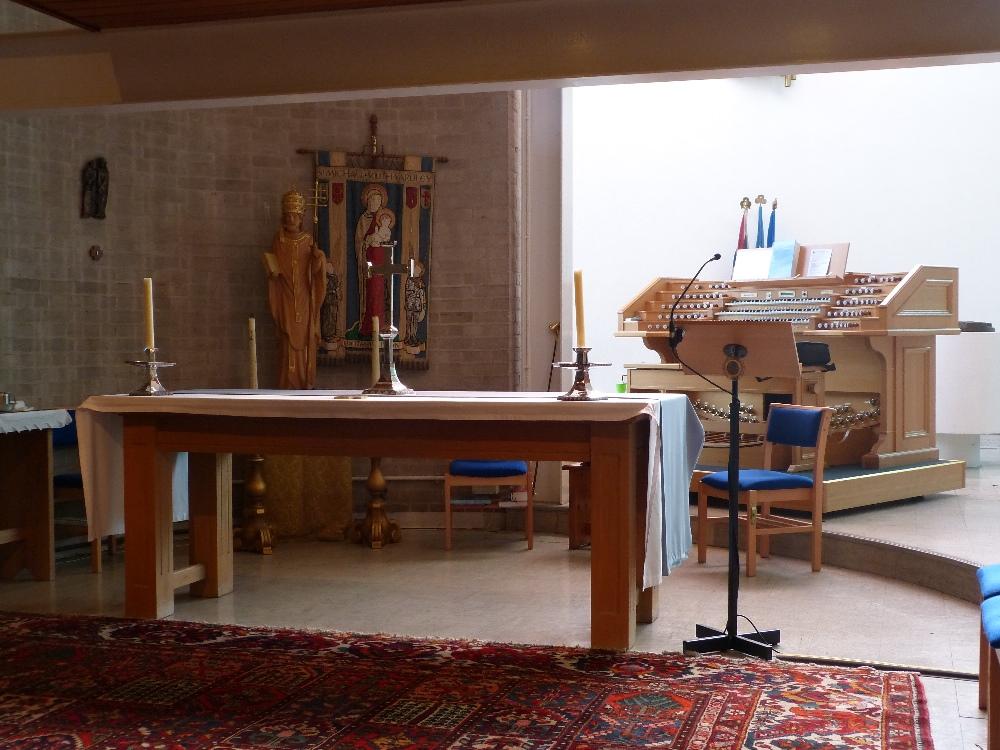 There is plenty of artwork to see and admire at St Michael’s. On entering the church through the main doorway, the eye is immediately drawn to the Crucifix (John Bridgeman, 1966) suspended over the altar, from which, in contrast with the traditional portrayal of a dying Christ, the figure of a living Christ reaches out his hands towards the world. On the east wall, overlooking the baptistery, is a sculpture of the Madonna and Child (John Bridgeman, 1966), while close by is to be seen the ornamental Font Cover (Alexander Fine Arts, 1966). Around the walls of the church, starting in the Gregory Chapel, are the Stations of the Cross (1988). In the Gregory Chapel it self is the Statue of St Gregory (1997), and the Mothers’ Union Banner, (c.1950’s), although regrettably there is no longer an active branch of the Union at St Michael’s. Holy Water Stoops are stationed at both the chapel door (Carma Legg, c.1997) and at the main door, (John Tirebuck, c. 1997). 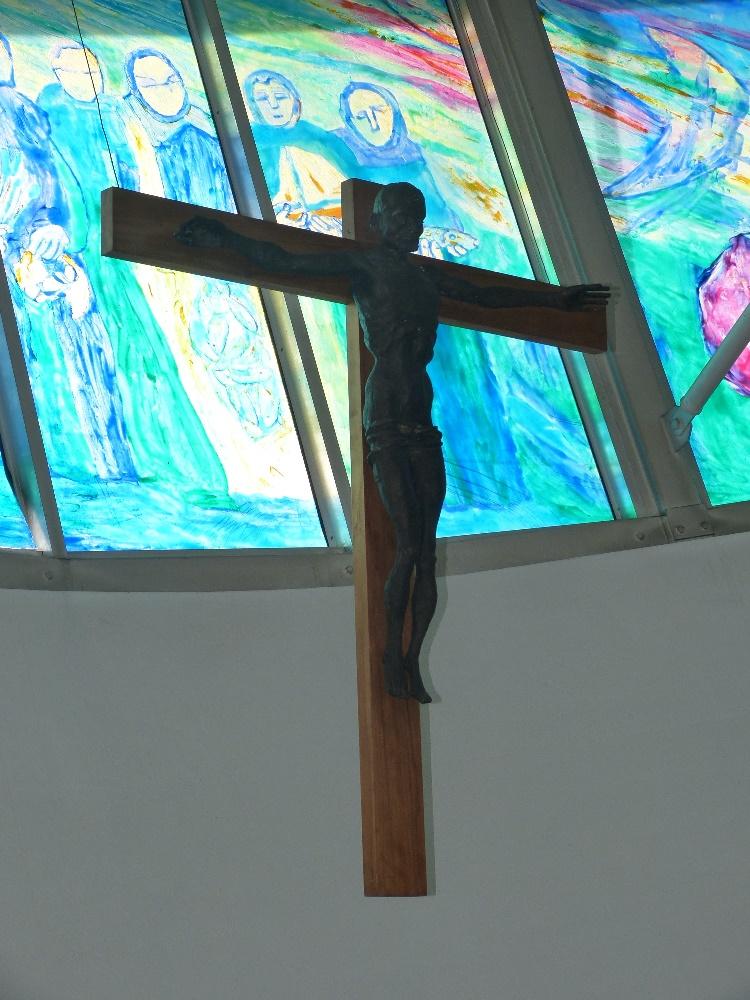 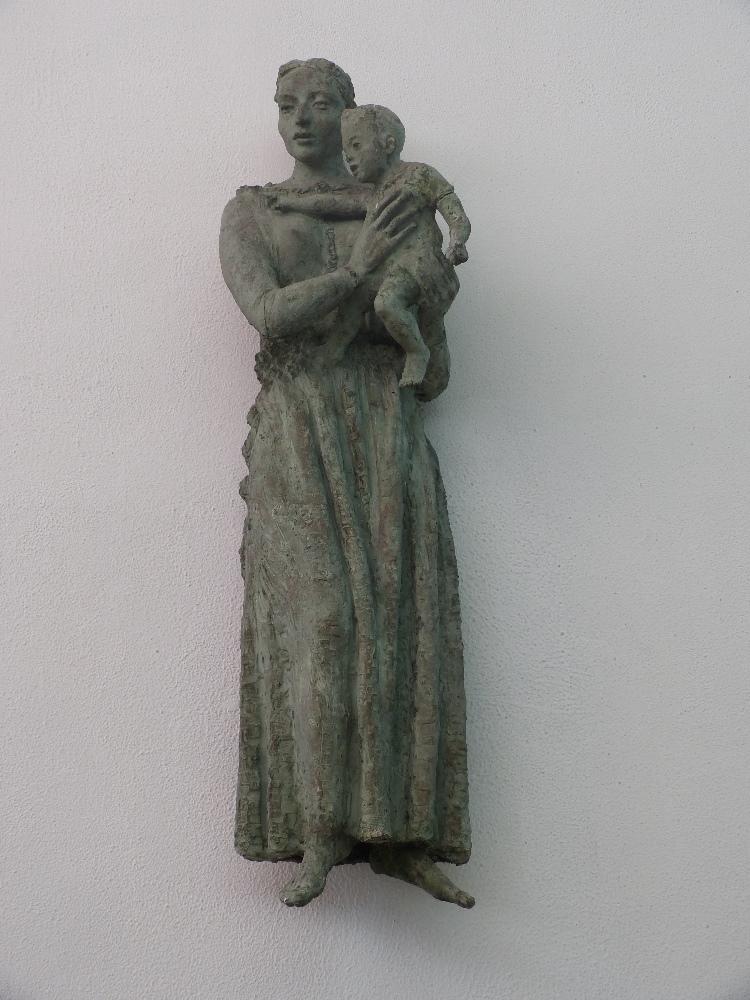 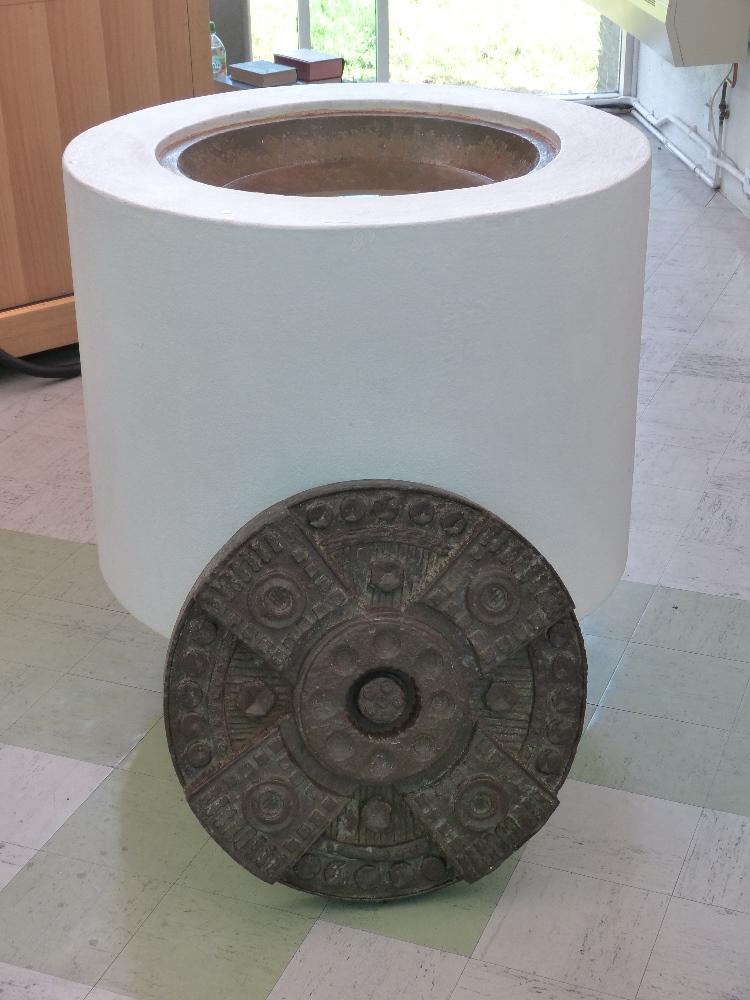 The refurbishment of 1999 provided the Church with further opportunities for the provision of artwork. Easily unnoticed is the overhead Templars' Cross, which is to be seen portrayed in the pattern of the tiles of the suspended ceiling. In contrast, impossible to be missed, are the painted panels of the Clerestory Windows (Rachel Wroe-Sawko, 2002), which span the entire length of the east wall above the altar. Following the refurbishment, the clerestory of clear glass above the high altar presented the challenge of strong south facing light in the eyes of the congregation. The solution was the frieze of painted and stained fibre panels which were attached on the inside of the double glazing. The panels are based with some freedom on two passages from the Book of Revelation. The artist has taken key themes from the Revelation, but most importantly the role of angels. On the far left is an angel carrying the seal of the living God. (Rev. 7:2). Second from the left is the figure of St Michael, identified by the sword in his right hand, while to his right is a portrayal of the Annunciation, with Our Lady (in blue) kneeling before the Archangel Gabriel, who is holding a white lily, the Christian symbol of virginity. In the centre, summoned by a trumpet call is a group of apostles, with the figure of Judas on the left, slightly turning away from the rest. Amongst the apostles are to be seen St Peter (fish), St James (pilgrim's staff), St Luke (palette and paint brushes), and St Bartholomew (knife). The panels on the far right show a multitude moving into eternal light, the journeying faithful, with the river of life and the tree of life laden with fruits (Rev. 22:1-2).

More information on our Clerestory windows can be found here

The Statue of St Michael (Peter Eugene Ball, 2001), stationed over the main west door, directly opposite the windows, was the church’s Millennium project. Note how the flamed copper wings are diminishing in size to create a sense of depth; the angelic host is represented in line behind the strong yet placid/contemplative face of the Archangel with his sword at rest. This is Michael, the protecting Angel, his work done, his battle won. 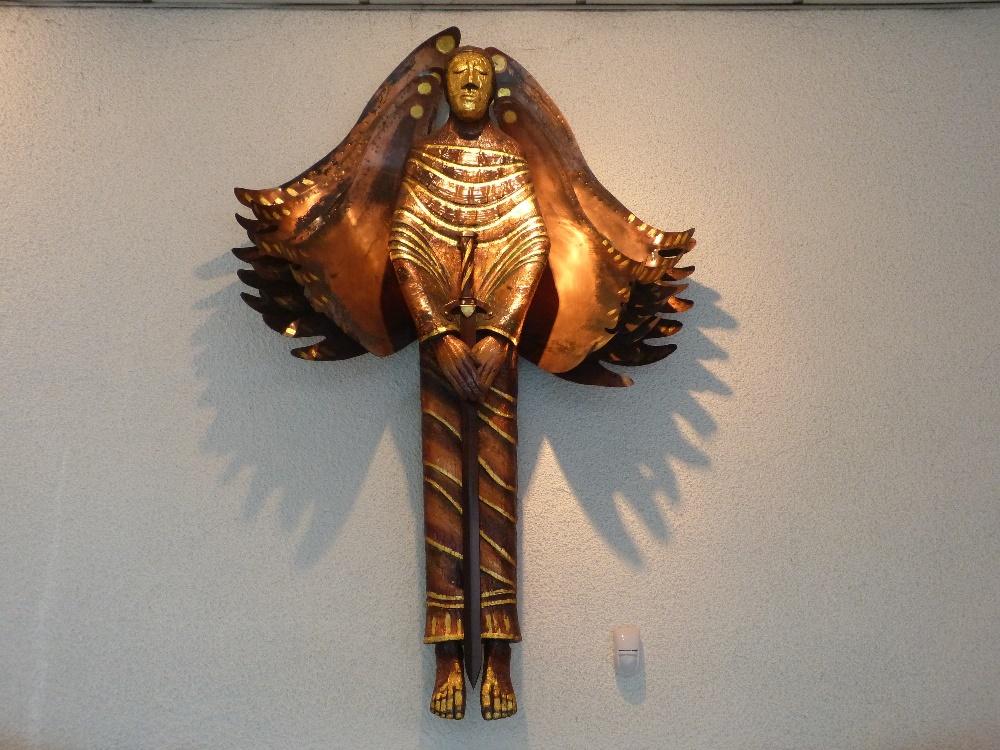 New for 2016 is the Remembrance Prayer desk with our Book of Remembrance commemorating congregational members, relatives and friends who have died. The Desk and Area was established in memory of a long standing member of St Michael's and was blessed by Bishop David Urquhart during his visit on May 8th 2016 as part of our 50th Anniversary celebrations. 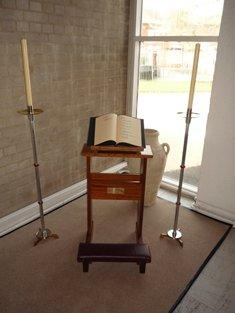 In the narthex is a replica Statue of Our Lady of Walsingham, to whose shrine members of the congregation make an annual pilgrimage.

Outside the church on the exterior south wall facing Yew Tree Lane, is the Wayside Calvary (2001), a gift from St Aidan’s, Small Heath. Beneath this is a Rose Garden of Remembrance where the ashes of several congregational members are scattered. Contrast the traditional figure on this crucifix with that portrayed by John Bridgeman in the crucifix above the high altar. 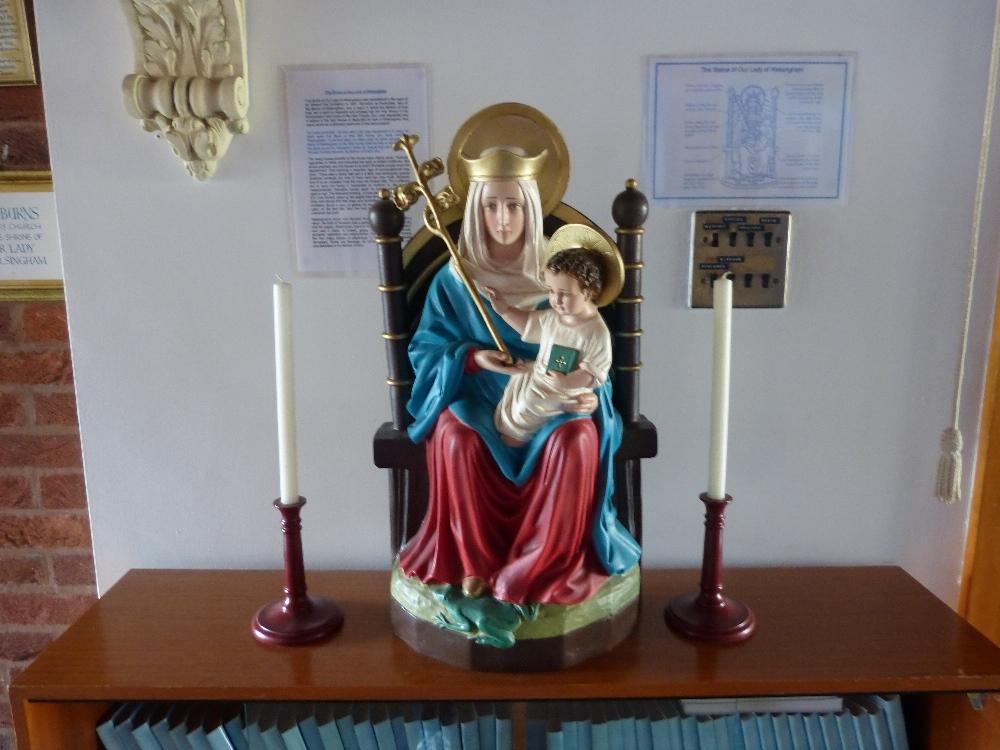 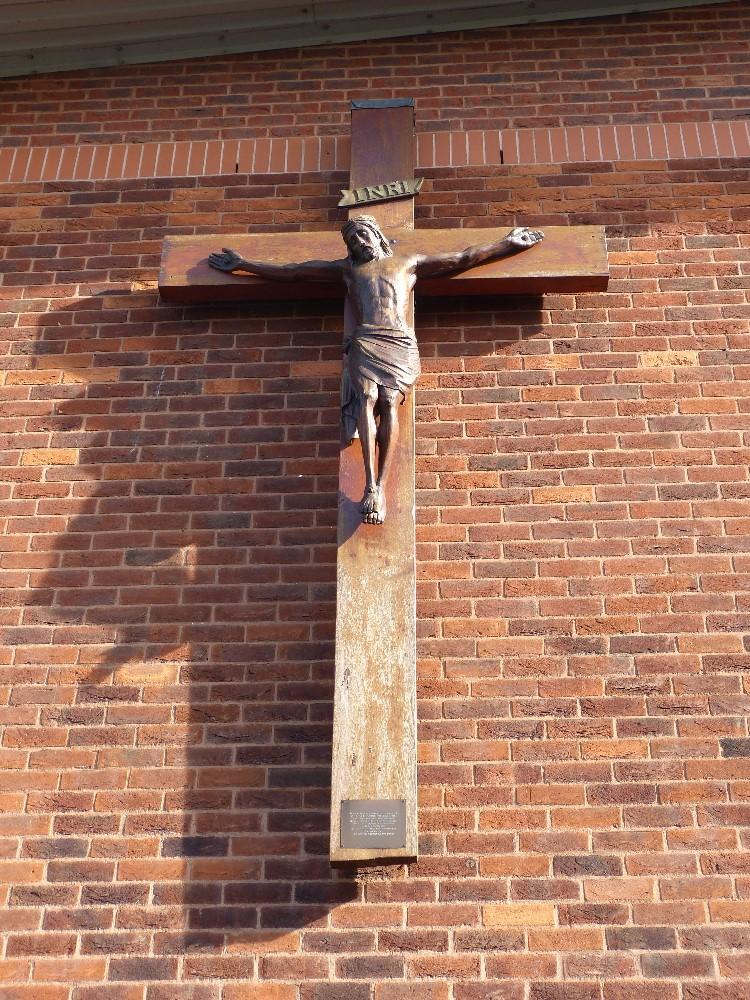 The organ is a modern digital instrument in the French style, which was custom built for St Michael’s in 2005 by the English / Dutch firm of Makin / Johannus. This commission was made possible by an exceptionally generous bequest from a former member of the congregation, which also funded the acquisition of the Steinway grand piano. 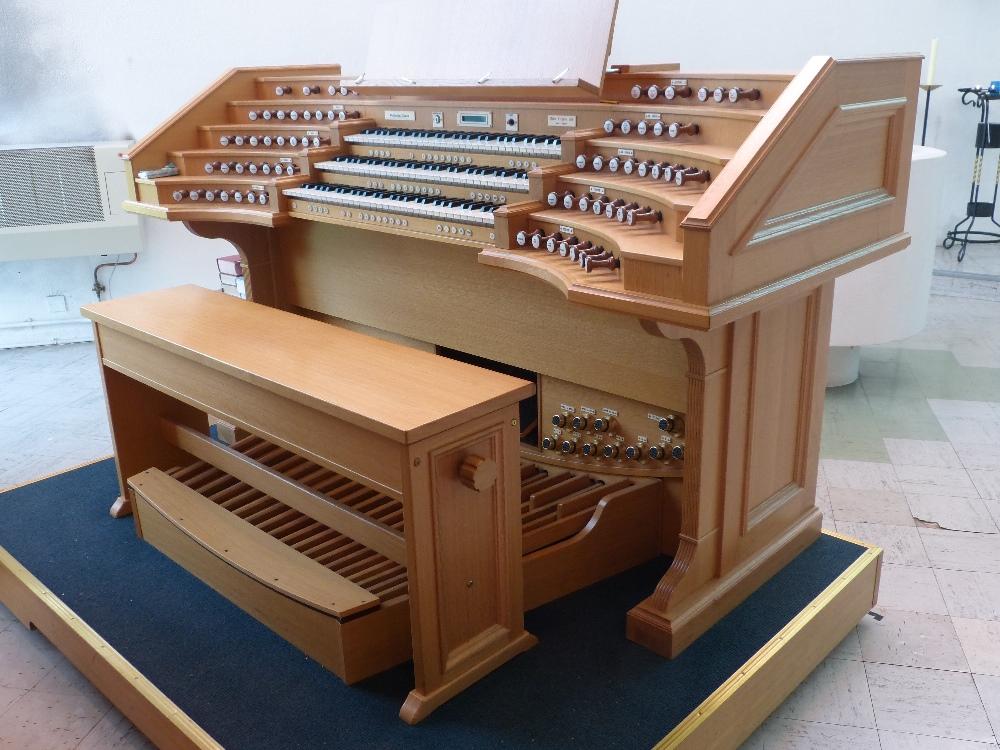 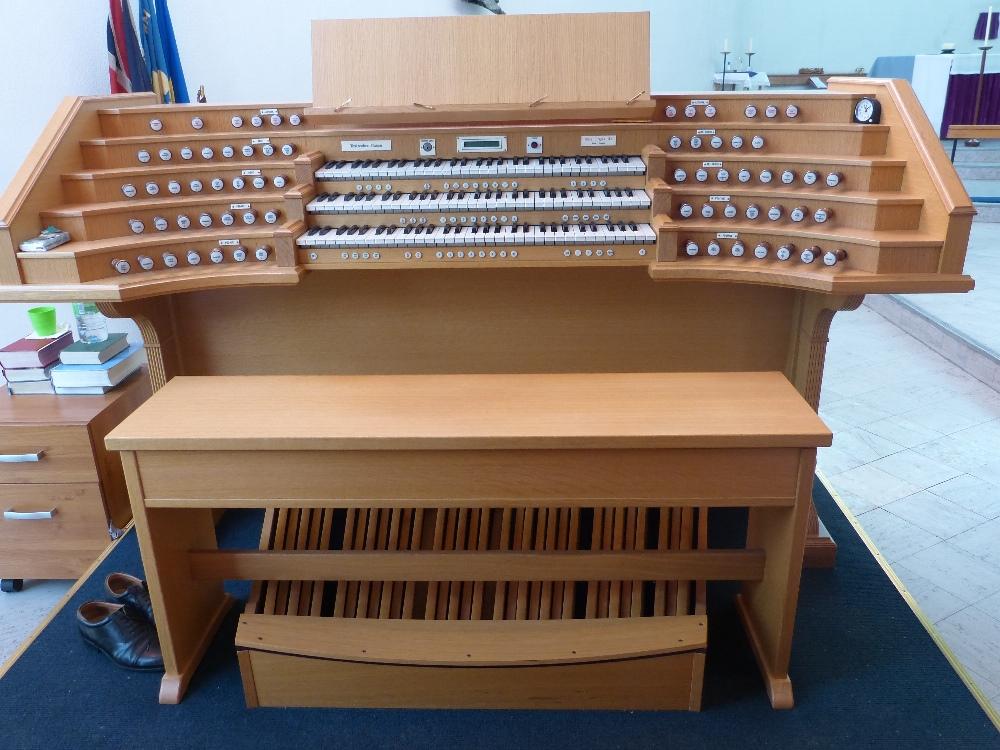 The church bell was salvaged from Trinity House and was an anonymous gift by a Yardley campanologist. It was once attached to a buoy in British waters and was decommissioned along with hundreds of others, most of them being scrapped, as satellite navigation became more sophisticated. The original bell, transferred in 1966 from its belfry above the entrance to the old hall to a new site above the narthex, is still in place and has recently been re-hung in a new housing. 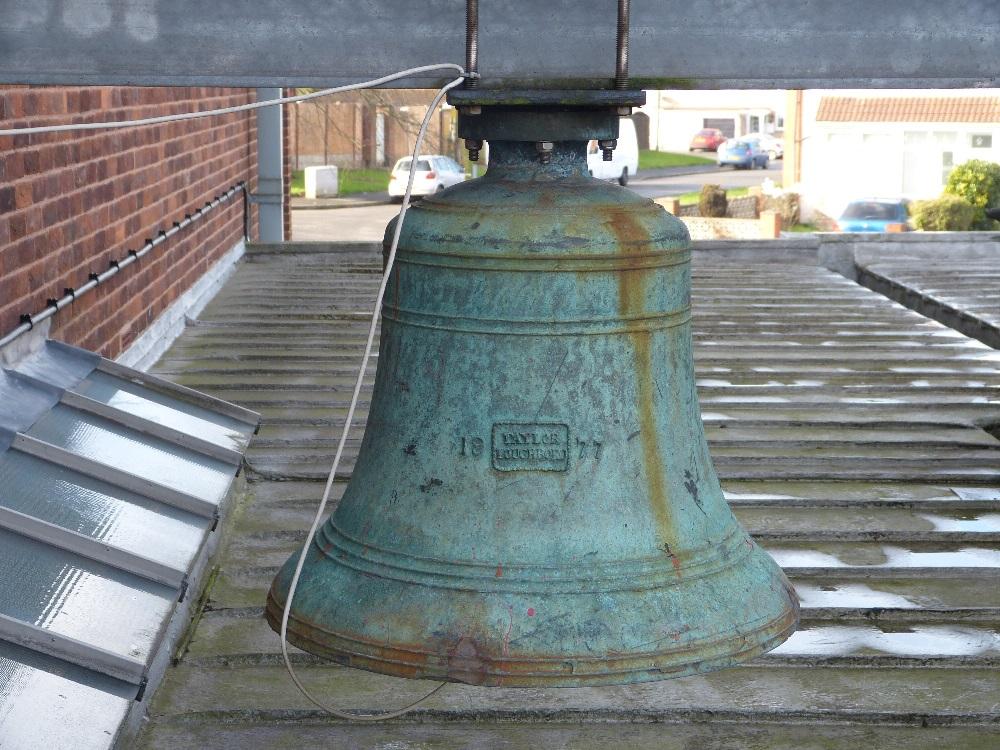